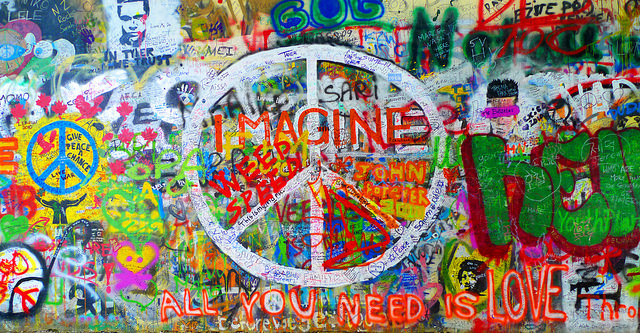 I never really cared too much about art. That is, until, I was exposed to the work of Robert Williams. I first learned of Mr. Williams’s work when his piece titled “Appetite for Destruction” became the controversial cover art for the album by the same name from Guns N’ Roses. I thought it looked cool and it stirred controversy. More than anything I think I appreciated that it caused controversy.

Here we believe in self-expression and art is the ultimate tool for self-expression. Artwork is there to represent the worst and the best of humanity. Consider the John Lennon Wall in Prague, Czech Republic. This is a living piece of art. In its early days it was an outlet for people who had no other outlet.

They painted grievances on the wall as a form of protest against their government. This wall pissed off the ruling communist party. It was a source of irritation to them but a symbol of hope for the masses. After the fall of communism the wall has lived on and has inspired copies.

A musical artist by the name of Rodriguez was a symbol of the anti-apartheid movement in South Africa. Rodriguez himself was unaware of his influence on the movement in South Africa. This is the power of art and why we believe in art as a medium for change, for expression, for elevating one’s own voice above themselves, for inspiration and a source of strength and courage.

The art of tattoo has been used for centuries by various people. The earliest known example of tattoo is from at least 5300 years ago and it is believed that tattoos in those ancient times were used as a therapeutic or diagnostic aid. More recent examples of tattoo have been used to as a sort of identification for individuals as well as proof of tribal affiliation.